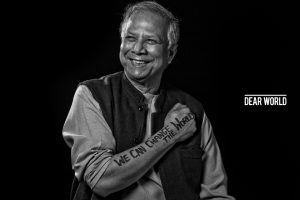 Professor Yunus Muhammad is the author of many books including the best-selling book titled creating a World without Poverty. Yunus is a Bangladeshi born native who moved to America in the mid 90’s. He thought at several schools before deciding to move back to Bangladesh and create what is known all over the world as the Grameen bank

Bangladesh is one of the poorest countries in the world, with a population of over 156 million people, roughly a quarter of that population lives in abject poverty. Professor Yunus decided to create the Grameen bank in other to alleviate and improve the economy of the country by focusing on helping the poor come out of poverty.

Most Nobel peace prize winners are usually heroes, people who have fought in extraordinary ways aside from war like Malala Yousafzai who is was a target by the Taliban and was shot for going to school and is now an advocate for girl child education all over the world. Professor Yunus did not do any of these things, but what he did for the poor people of Bangladesh by creating a microcredit system accessible to them cannot be overemphasized and is worthy of the award.

Yunus realized that the way to help people is not just to give them free things through charity but to lend them money to start some form of small businesses. He believed in the poor that if given the chance and resources, most of them would succeed and come out of poverty. The poor would earn enough money to improve their lives and that of their families and will pay back the money they had borrowed like a regular bank except that this was at a much lower rate for the poor.

By creating the Grameen bank, Bangladesh has cut down on infant mortality rate, more children (girls especially) stay enrolled in school all through secondary education, healthcare and nutrition has improved, most of all, the overall poverty in the country has dropped significantly.

Today, Grameen bank has exceeded expectations, having been founded by non-bankers but an economist and his students merely trying out an idea. Grameen bank has more than 1,000 branch offices serving over 35,000 villages and about 95 percent of the customers are women. Grameen bank which started in a tiny village in Bangladesh has become a growing worldwide attraction that countries want to adopt  in hopes of improving the economy and lives of their people.