In the fourth blog I fully explained and I gave a detailed summary of the book I read this semester titled “The Healing of America: A Global Quest for Better, Cheaper, and Fairer Health Care” by T.R. Reid. 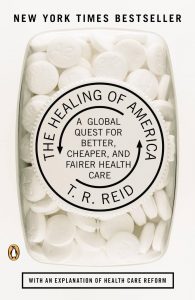 However, in the first blog I promised you I would rewatch a movie very similar to that of the book. Let me give you a recap. This book was about the author going around the world searching for a perfect system of healthcare. During the reading of this book I recalled watching a movie in high school that was very similar. It was called “Sicko” written and directed by none other than Michael Moore.

To start off the movie states that the U.S. health in general is ranked 37 out of 191. During the movie he compares American health care with others such as Canada, France, the United Kingdom and Cuba. While traveling to those countries he interviews people in waiting rooms and people getting care in hospitals. Moore focuses on the private insurance companies and how they exploit and avoid actually paying for their customers’ medical needs. People sometimes die because of it, and the ones who live are stuck with huge medical bills. It also shows how requests for treatment are denied for plain dumb reasons. There was this one woman was denied an operation to remove her brain tumor because the insurance company said it was not life threatening. She then died shortly after which is very tragic.

This is when Moore takes us to several foreign countries that have universal health care. 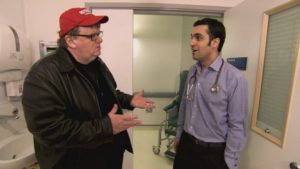 Here the citizens, and even visitors, receive everything for less to almost free, which is paid for by that government. This is very similar to the examples in the book written by T.D. Reid in which in England, not only is your hospital stay free, but they’ll even reimburse those that took the bus to get there in the first place. In Cuba, prescriptions cost about a nickel’s worth and in Canada, everyone has their own personal doctor whom are assigned to live in their house.

However, a great point that I like about this is he also describes the things he does not like very much about those countries with universal healthcare. One thing is the long waiting lines. This is the one thing that Americans ironically take for granted considering it’s much more expensive. 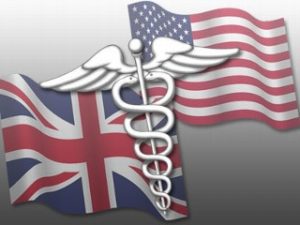 In Canada, you can wait for hours and hours. In France, he answers the question as to whether or not paying taxes is a so called burden the people. He interviews a family who makes 96,000 U.S. dollars that don’t seem to be bothered by higher taxes. Also in England, he interviews a doctor to see if his pay is worth becoming a doctor. As I pointed out in the last blogs, England hospitals are not private and instead the doctors don’t get paid as much as the ones here in America. However the doctor in England explained that it’s just fine.

During the watching of this film I couldn’t help but compare it to T.R. Reid’s book. Being that the book was written after the film, I would not be surprised if Reid took inspiration from the movie to further his exploration for the perfect healthcare system. However, like I said in the last blog, I truly don’t believe there is a perfect system. What we should do is pick the greatest points from each individual country. We could use this method to not just healthcare but other policies as well. This is the closest to perfection we can get.