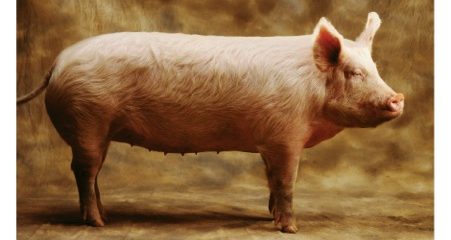 The first section of the book Pig Tales: An Omnivore’s Quest for Sustainable Meat, “The Nature of the Beast” goes into depth about the mental capacity of pigs, the effect of wild boars in their non native land, and why humans have domesticated pigs. All this coming to the conclusion that we, us humans, have broken an ancient contract of we have had with all domesticated animals. That contract being we take care of them and they give us food. The commercial pig farms do not allow this.

For the first chapter “Hog sense” Estabrook focuses on a study done on pigs. The study found many things including that each pig has a different temperament and are highly sociable they even picked out their favorite caregivers.  They are reward driven and can be trained to work a computer for treats. The pigs learned quicker than most dogs and loved to play. Their toys had to be switched out regularly as they got bored easily. They even learned how to trick other bully pigs so they could gain a reward. This means they have the sense of mind to be deceptive about their actions. The pigs also could recognize themselves in a mirror meaning they were self-aware. Through out the years pigs have been trained to replace hunting dogs as well as other work animals. A post in The Daily Mail out lines the fact that pigs are extremely smart even outsmarting dogs and chimps. This means the better the pigs are treated the more they can give us humans and the better they flourish. Being stuck in an extremely  small cage all day helps no one including consumers and the environment. Showing pigs more affection and meeting their needs allows them to grow quicker, produce better meat, as well as produce larger litters. Growth overall goes up. Therefore helps the economy as farmers make more. It is not just about pig welfare.   These animals are intelligent, treat them like it.

Their intellect is exactly what is harming the environment, and making them hard to control. In the second chapter “Wild Things” Estabrook is on the hunt for the elusive wild hog. Wild hogs are such a problem it is basically open season for anyone that wishes to hunt them (definition of what a wild hog exactly is can be found here). This is because pigs thrive in any environment. They are smart and elusive and destroy the eco system. If a pig escapes from a farm they can easily survive in the wild and bread. The food sources for wild hogs are endless, there is nothing they can not eat that is edible: from worms to any type of eggs to salamanders to diving for crabs to dead corpses (including human ones) to crops. They harm endangered species and can up root a crop in only a night. Their sense of smell find just about any sources of food. Wild hogs can kill a black bear so their only true enemy is the human. Wild hogs are a huge problem, but their is a profit to be made. Wild boars can be trapped and sold (it is extremely difficult to trap them as they catch on to what is happening very quickly) to approved feral swine holding facilities. These facilities kill and process the hogs selling them to high end chefs and others who wish to pay the hefty price. The meat is a far cry from the industrial pork chop. Even though wild hogs can destroy farms the farmers can in return capture an sell the animals for extra money. These animals are an example that if a pig is raised right on a farm, wild hogs and pigs are of the same breed of animal, they can produce some very good meat. The animal, the farmer, and the consumer all benefit.

The third chapter digs into the history of domestication.  The chapter is called “Of Hogs and Humans”. It mainly highlights the fact that pigs were the first animal that was domesticated and even came before crops. The domesticated hog benefited humans in many ways and it is a shame that we treat them so poorly in industrial farms.

If you want to try wild boar meat with out hunting or trapping it’s available  online http://www.dartagnan.com/buy/wild-boar-meat/